Web Editor Victor Escoto and I created this campaign with the intention of increasing the number of “likes” on The Daily Aztec‘s Facebook page, which is a primary driver of website referrals. In the first seven days, the campaign resulted in an increase of 650 “likes,” an audience growth of 18 percent. The campaign also had a large impact on the page’s reach. During the first four weeks of the campaign, the average total reach was 172 percent higher than the previous period.

The campaign was also instrumental in developing awareness and engagement with our readership at a time when a newly-created street team was developing new methods of distributing print issues of The Daily Aztec. 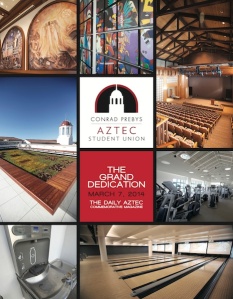 To commemorate the opening of San Diego State’s $104 million news student union I spearheaded the creation of a special magazine, the first magazine published by the student-run newspaper in years. I assigned content to a team of editors, writers and photographers, worked closely with the graphic specialist to create the vision and look for the magazine and collaborated with the advertising team to find clients and set pricing levels. I also wrote several of the stories for the magazine based on the theme of leadership in the new student union and through SDSU’s history. 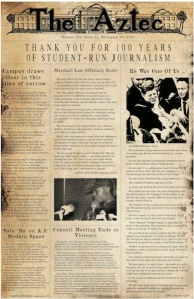 The 2013-14 school year marked 100 years of student journalism at San Diego State University, since the founding of the newspaper in 1913-14. To celebrate, we wanted to honor the accomplishments of the The Daily Aztec during its long history while engaging alumni in new ways. To accomplish this, I created the newspaper’s first public relations team, tasked with the Alumni Codices project. In it, alumni were invited to write short articles discussing their experiences at SDSU and the impact it had in their lives in their own words.

In November 2013 I also spearheaded a centennial special issue of the magazine, along with the PR staff. In it we collected some of the most memorable coverage the newspaper had conducted at SDSU.

The year-long celebration culminated with a dinner celebration attended by approximately 150 alumni. During the event The Daily Aztec alumni Tom Blair, David Hasemyer and