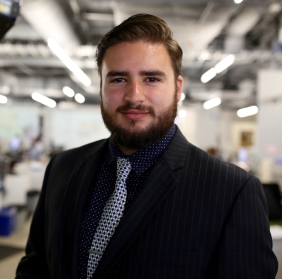 Leonardo Castaneda is a San Diego-based journalist with inewsource, a data-driven investigative news organization. He has reported on topics ranging from the opioid addiction epidemic in the region, to the transformation of supposedly temporary classrooms into permanent fixtures at hundreds of local schools.

His work appears on inewsource, KPBS radio and TV and Times of San Diego. His stories often have a strong emphasis on data analysis and document-based investigative work.

Castaneda graduated with honors degrees journalism and economics from San Diego State University. While there he wrote for the school’s student-run newspaper The Daily Aztec as a freshman staff columnist, eventually rising to the position of editor in chief after working as opinion editor. After taking the position of editor in chief, he worked to reinvent the century-old newspaper into a modern multimedia news organization.

Leonardo is bilingual and biliterate in Spanish. He has written for The Daily Aztec’s Spanish section, Mundo Azteca, and wrote a breaking news story with a unique angle for inewsource based on research of Mexican newspapers, magazines and online news organizations.